Louisville Slugger baseball bats were used by legends like Babe Ruth, Lou Gehrig, Ty Cobb as well as so many amateurs around the world. The brand has been family-owned for more than a century, but that may change. Wilson Sporting Goods has agreed to pay $70 million to buy the official bat maker of Major League Baseball. Jake Ryan reports from member station WFPL in Louisville.

JAKE RYAN, BYLINE: The inside of a baseball bat factory is a busy place. Wood clings against the floor, cutting machines constantly churn and the scent of fresh-cut wood lingers all day. Tours of 20 people walk through stacks of white ash and maple and watch how a chunk of wood becomes a famed Louisville Slugger. P.J. Shelley operates a machine called a hand turner, where a bat is crafted from a block of spinning wood with nothing but a chisel-like tool.

P.J. SHELLEY: In the 1880s up until the early 1980s, we were still hand-turning bats for professional ballplayers. It takes about 30 minutes to hand-turn a bat. Today, we're fully automated. We're making bats today in 30 seconds.

RYAN: The Louisville Slugger bat-making company Hillerich and Bradsby is steeped in history. The company still makes all its wooden bats - about 5,000 a day during peak season - in downtown Louisville, just blocks away from where it crafted the first one in the late 1880s. This latest chapter is big news in the baseball industry. Louisville Slugger has lost ground to competitors in recent years. Hillerich and Bradsby CEO John Hillerich IV says the sale wasn't easy but necessary.

JOHN HILLERICH: We had to, you know, make a very tough decision. We'd rather the brand go on and have somebody else I own it, then potentially put it in jeopardy by keeping it in the family.

RYAN: With the deal, Hillerich says 52 of the company's 270 employees in Louisville will lose their jobs. Wilson officials say they have no plans to overlap the brands quite yet. For baseball fans like Andy Gonzalez, who was visiting the factory from Miami, the name Louisville Slugger is synonymous with the game.

ANDY GONZALEZ: That makes me think of just, you know, baseball in general, man. It's baseball. At the end of the day, you think of Louisville Slugger, you think of the sport of baseball.

RYAN: The deal isn't finalized until shareholders approve it. That's expected in the next few weeks. For NPR News, I'm Jake Ryan in Louisville. Transcript provided by NPR, Copyright NPR. 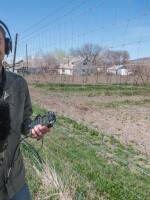 Jake Ryan
Jake Ryan is reporter and producer at KVNF. He received his B.A. in Journalism from Western Illinois University. After serving with Americorps and volunteering for a community radio station in Maryland, he graduated from the Salt Institute for Documentary Studies. His pieces have been aired on Delmarva Public Radio, Maine Public Broadcasting Network, and New Hampshire Public Radio. He enjoys board games, trying new things, and flying kites.
See stories by Jake Ryan