The name "Brownsville" doesn't necessarily vibrate the way neighborhoods and cities like Compton, Englewood and Camden do, places that stay in national headlines thanks to the extreme risks their mostly black and poor residents have to deal with every day.

But this area in central Brooklyn — just over a mile square, and home to about 58,000 people — is struggling. The median household income within Brownsville's community district is less than $27,000 per year, the lowest in New York City. In one census tract in this district, that number plummets to just over $11,000 per year.

Gang violence is an ongoing concern, especially within the neighborhood's 18 housing projects, which comprise more than 100 buildings. And before the New York City Police Department's infamous stop-and-frisk policy was curtailed in 2013 by a court ruling, the rate of such police stops was higher in Brownsville than anywhere else in the city: 52,000 stops reported in four years, as many as 61 average stops a day at one point.

We wanted to meet some young people who live in Brownsville and learn how they were spending this long, hot summer, particularly in the era of Black Lives Matter.

We got to know three young men — 17-year-old Ray, 16-year-old Daron and a 21-year-old also named Ray — through the Brownsville Community Justice Center, an initiative of the that provides interventions, services and programs to young people who have already had some contact with the legal system.

In creating this video portrait, they allowed us glimpses of their individual experiences — expressed in their own words, and through the tight-focused lens of their daily lives in Brownsville. "Once you get past the surface of it being very hard," as the older Ray says, "you see the softness in it." 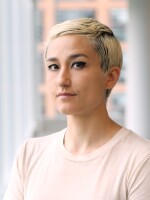 Mito Habe-Evans
Mito Habe-Evans (she/her) co-manages NPR's Video team and is responsible for the creative direction and sensibility of NPR videos. She leads the team in its pursuit of projects that are "smart with heart," from the comedic economics explainer series Planet Money Shorts to the short film Senior Spring, a national portrait of teens and guns. She developed NPR's signature documentary style with What Democracy Looks Like and One Nation Under The Sun.
See stories by Mito Habe-Evans

Anastasia Tsioulcas
Anastasia Tsioulcas is a reporter on NPR's Arts desk. She is intensely interested in the arts at the intersection of culture, politics, economics and identity, and primarily reports on music. Recently, she has extensively covered gender issues and #MeToo in the music industry, including backstage tumult and alleged secret deals in the wake of sexual misconduct allegations against megastar singer Plácido Domingo; gender inequity issues at the Grammy Awards and the myriad accusations of sexual misconduct against singer R. Kelly.
See stories by Anastasia Tsioulcas