The minds of octopuses may offer a glimpse at alien intelligence, researchers say

The mind of the octopus is so different from human intelligence that some people are studying it to see what alien intelligence might look like. Octopuses branched away from humans on the evolutionary tree some 500 million years ago. To find out how their intelligence works, we're going to turn the mics over to Emily Kwong and Aaron Scott, co-hosts of Short Wave, NPR's daily science podcast, for a story about octopus researcher Dominic Sivitilli.

EMILY KWONG, BYLINE: OK, Aaron, many a tale has been written about how ridiculously intelligent octopuses are. My favorite thing about them is how they're escape artists. So the aquarium near where I grew up as a kid, they had this problem of fish disappearing from their tanks in the night.

KWONG: And after a few days of this through, like, nighttime vision hallway cameras, the staff figured out it was the octopus...

KWONG: ...Sneaking out of its tank for a snack and then sneaking back in before the lights were turned on.

SCOTT: That sounds like an episode of "Octopus CSI." I love it.

SCOTT: So this story begins last summer when cameraperson extraordinaire Stephani Gordon and I headed up to meet Dominic at Friday Harbor Laboratories on San Juan Island.

KWONG: Awesome. I am sensing a field trip. Set the scene, my friend.

SCOTT: Dominic's building is on the edge of this beautiful harbor. He's set up in a room that has tanks running along the walls. And there are pipes that pump seawater through them. And then each of the octopuses has its own tank full of rocks and shells and toys, like floating plastic dinosaurs - plus, to your point, full-on security measures.

SIVITILLI: ...Fully on and then bricks. So the bricks might be overkill, but I sleep better.

SCOTT: So when we arrive, he actually removes the bricks from one of those tanks and takes the lid off. And it's this magical moment where he places his fingers on the surface of the water, and then this small octopus kind of rises out of the corner and stretches out her arms to actually touch his fingertips.

SIVITILLI: This is Lizbeth. She is our giant Pacific octopus. She can grow to being well over 20 feet long if she spread her arms out.

SCOTT: Yeah. I mean, it's - right now, she's not anywhere close to that. She's just, like, a foot across. But it was so cool to watch as her suckers kind of work their way across his fingertips.

SIVITILLI: Our fingertip might have 400 mechanical receptors. A given sucker might have tens of thousands of mechanical and chemical receptors on it. So each sucker is many times more mechanically sensitive than one of our fingertips is and also has the benefit of being able to taste and smell the world around it. And it's able to do this because each sucker has a local computation center where most of this information is being processed.

SCOTT: You can think about it like her suckers can feel, they can taste, they can smell, and he says each sucker basically has, like, a little mini brain of its own. Each of those little processing centers link together to create these thick bands of neurons that run the entire lengths of the octopuses' arms.

SCOTT: You know, we humans are so brain centric. Everything we perceive and process about the world is routed through this central command center in our craniums but not so the octopus.

SIVITILLI: It's really hard to imagine how these animals are experiencing the world. Their nervous system and their perceptions and sensory systems are built entirely differently from ours. While most of our neurons are in our brain, most of their neurons exist beyond their central brain in their arms and suckers.

KWONG: Distributed intelligence sounds like it radiates kind of throughout their body. So if the suckers in arms are thinking for themselves, how does that explain octopus behavior?

SCOTT: That's exactly what Dominic is trying to figure out. He created this puzzle box that has rows of crevices, and he put some shrimp into one of those crevices and then sets the box on the wall of the tank so that we can see into it, but all Lizbeth can see is a black box with a couple of holes in it. So she crawls under the box, and she starts running her arms into the holes.

SIVITILLI: Come on. You can do it.

SCOTT: Her suckers are exploring each crevice, probing for a snack. And then finally, one sucker finds the shrimp and all of its neighboring suckers wrap around the shrimp bit and then pull it up to her mouth.

STEPHANI GORDON, BYLINE: She got it.

KWONG: Oh. So neurologically, there's almost, like, a sucker chain reaction happening in these arms.

SCOTT: Yeah, exactly. That's a great way to think about it. I mean, he's analyzed hours of footage of different octopuses all doing this test. And what it looks like is that the more suckers get involved, the stronger a signal they all send to the brain. Think of it kind of like upvoting something on Reddit.

KWONG: I'm really curious then, Aaron, about how such a complex system even evolved.

SCOTT: In Dominic's eye, it has a little bit to do with the fact that, you know, we simple vertebrates with our skeletons, we can only move our arms and our fingers and our legs so many ways. But an octopus can bend its eight arms with just almost infinite freedom, twisting and winding. And then you add all that sensory information that each sucker is receiving, and you think about the fact that they hunt in the dark, so they are not even able to see things. So it's like they're really being guided by each sucker as they explore these rock walls or coral reefs. And you can see there is a lot of information to process all at once.

SIVITILLI: What the brain will do is send out a very generalized command to multiple arms at once and let the arms kind of figure it out from there. And the suckers with all their chemo receptors, all their mechanical receptors, are very well equipped to then find interesting objects out there in the world.

SCOTT: And it seems like in the lab, Dominic himself is one of the most interesting things for them to find.

SIVITILLI: If they see me around the lab, they will approach, go to the edge of their tank and just watch the interesting things that are happening. Here I am studying them, and yet they seem to also somehow be studying me in their own way. In my time studying the octopus, I really learned to appreciate that there are many varieties of intelligence out in the world and possibly the universe. It's not about how intelligent they are. It's about how they are intelligent.

KWONG: I love this point so much, Aaron, because it's such a part of science to help us understand things on its terms, right?

SCOTT: Absolutely. Absolutely. And I really think that's the point that Dominic is trying to make with this research.

CHANG: That was Aaron Scott and Emily Kwong, co-hosts of NPR's daily science podcast Short Wave. You can find the full episode about the alien mind of octopuses, as well as more tales of science and wonder, by subscribing to Short Wave wherever you get your podcasts. Also to see Lizbeth and the other octopuses in action, check out a video that Aaron produced for Oregon Public Broadcasting. You can find that on YouTube. Transcript provided by NPR, Copyright NPR. 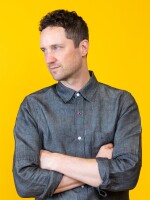 Aaron Scott
Aaron Scott (he/him) is co-host of NPR's daily science podcast, Short Wave. The show is a curiosity-fueled voyage through new discoveries, everyday mysteries and the personal stories behind the science.

Emily Kwong
Emily Kwong (she/her) is the reporter for NPR's daily science podcast, Short Wave. The podcast explores new discoveries, everyday mysteries and the science behind the headlines — all in about 10 minutes, Monday through Friday.
See stories by Emily Kwong