The Old South Pittsburg Hospital in Pittsburg, TN is said to have menacing ghosts that roam its empty halls. Once a functioning hospital, it is believed to be built over an underground spring and been the site of a base for Union soldiers during a bloody Civil War battle.

On this episode of South of Spooky, hosts Gavin Jackson and AT Shire join the team from South Carolina Paranormal Research and Investigations to explore the notorious haunted abandoned hospital. 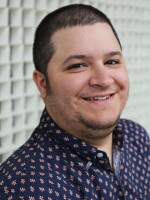 A. T. Shire
AT Shire studied guitar performance at Muhlenberg College in Pennsylvania. He received his Audio Engineering degree from the Institute of Audio Research in New York City, then worked in many Jazz Clubs and music studios in Manhattan, including the famed Birdland Jazz Club where he worked with names such as Michael Feinstein, Arturo O’Farrill, and Wynton Marsalis.
See stories by A. T. Shire

Gavin Jackson
Gavin Jackson graduated with a visual journalism degree from Kent State University in 2008 and has been in the news industry ever since. He has worked at newspapers in Ohio, Louisiana and most recently in South Carolina at the Florence Morning News and Charleston Post and Courier.
See stories by Gavin Jackson