WEPR-FM, 90.1, Greenville/Spartanburg, will be operating at low power during tower maintenance. The transmitter may also be taken off the air periodically. Streaming is not affected.
SC News

William "Bill" Terrell, known to many South Carolinians as the host of the SCETV program Job Man Caravan, has died at age 79. He passed away Thursday after a lengthy illness, according to an obituary shared by Pearson's Funeral Home in Columbia, SC.

Originally from Memphis, TN, Terrell moved to South Carolina in 1967 and joined the staff of radio station WOIC-AM.

In 1968, he began producing and hosting SCETV's Job Man Caravan, a groundbreaking television show spotlighting career opportunities for the Palmetto State's underserved Black population. It educated audiences about job interview techniques, traveled to a different town every week with a mobile TV unit, and featured popular musical acts. The show garnered ETV its first Emmy Award a year after its debut.

Terrell also served as executive producer of SCETV's For The People, originally hosted by Listervelt Middleton, focusing on national and international issues affecting people of African descent. The program continued his efforts to inform, enlighten, and empower South Carolinians.

Before retiring, Terrell acted as visiting professor of broadcasting at Claflin University in Orangeburg, SC.

He was also known for his years of community service, including serving as a member of the Board of Directors of the Columbia Urban League and the Columbia Opportunities Industrial Center, campaign chair for the United Black Fund of the Midlands, and a host for South Carolina United Negro College Fund Telethon, according to the South Carolina African American History Calendar. 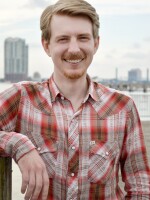 Sean Birch
Sean Birch has held many roles in his public radio career. As Director of Programming and Operations for South Carolina Public Radio, Sean is in charge of day to day operations of the radio network, chooses the programming heard on the stations, and leads the creation of local radio content and podcasts.
See stories by Sean Birch