SC News
Spoleto Festival USA and Piccolo Spoleto Coverage
00000177-2120-db48-a97f-fb222fe30000 South Carolina Public Radio brings you coverage of Spoleto Festival USA in Charleston, SC, May 27 through June 12, with reports throughout the day on the artists, events, and organizers of both Spoleto and Piccolo Spoleto.Listen to Performance Today and Sonatas and Soundscapes each week day for previews of upcoming performances and guest interviews.Spoleto Coverage Archive

The Carrion Cheer: A Faunistic Tragedy at Piccolo Spoleto

Artist Christian Orendt talks with Jeanette Guinn about The Carrion Cheer: A Faunistic Tragedy an installation at the Halsey Institute of Contemporary Art on Calhoun Street as part of Piccolo Spoleto.

Orendt is half of the Germany-based duo Böhler & Orendt who have created a “makeshift transdimensional stopover camp,” the consisting of several interconnected tents through which viewers can walk. Each tent features an apparition of an extinct animal, such as a Steller’s Sea Cow, the Carolina Parakeet, and the Pinta Island Tortoise, which will appear as a projection on a screen of mist.

The extinct animals sing, in chorus, a song of forgiveness to humans for causing their ultimate extinction. The tents also feature cave painting-like drawings of the animals’ encounters with humans. While whimsical and imaginative, the installation comments on humans’ relationship with the world around us. Böhler & Orendt’s project confronts the notion that humans are thought as the most intelligent beings, as they suggest these animals are capable of traveling through time and dimensions to revisit us. 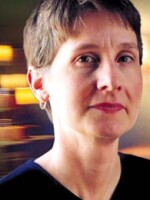 Jeanette Guinn
Jeanette Guinn is a professor in the Arts Management Program in College of Charleston’s School of the Arts and is pleased to have former students working in the US, Europe and Australia. After interning at the South Carolina Arts Commission during graduate school, Jeanette spent 25 great years working as an arts manager.
See stories by Jeanette Guinn