Work continues on the tower for 90.1, WEPR-FM, Greenville. The station is periodically operating at low power and may go off the air in order to protect the workers on the scene. Streaming is unaffected.
On the Keys

VadymKholodenko won the Gold Medal at the 13th International Van Cliburn Piano Competition. On this week’s On the Keys, host David Kiser interviews Vadym. He then plays Tchaikovsky’s First Piano Concerto with the Greenville Symphony Orchestra led by EdvardTchivzhel. In between, he plays a Polka by Rachmaninoff that enamored audiences last year in Greenville, in an impromptu performance at an after-party.  Though he has won one of the most well-known piano competitions, Vadym shares his distaste for competitions in the interview. 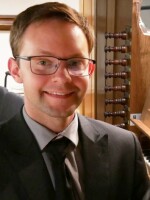 David Kiser
David Kiser is host and producer of On the Keys, an hour of piano music played by virtuoso pianists, for South Carolina Public Radio's Classical Stations. David began studying piano at 10. More recently he obtained a Masters Degree in Piano Performance from Converse College with Professor Douglas Weeks. Formerly he studied at the University of South Carolina and before that the College of the Charleston with full scholarship. (Not to mention a stint at Wofford College studying government). He he has also studied organ with Brennan Szafron of Converse College and has passed the playing portion of the AGO Associate Exam.
See stories by David Kiser